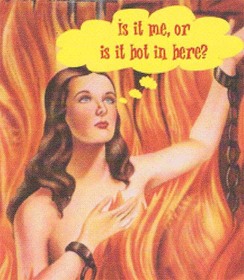 The “Hot Flashes” women’s vocal group began as an offshoot of another community singing endeavor, “The Travelin’ Shoes Gospel Choir”, which was based in Pepin, Wisconsin.  Several female members of that organization began singing together in 2008, meeting in one another’s homes and basing their early repertoire on familiar “girl group” songs of the ‘50’s & ‘60’s.  Now these ladies gather weekly to rehearse at St. Sophia’s Church near Stockholm, Wisconsin.

We come together from a variety of professions:  health care, traditional arts and crafts, farming, education, culinary arts, small businesses, and a few of us are even lucky enough to be “retired”!  We’ve been together long enough to support one another through inevitable life changes from marriage and new beginnings to illnesses and bereavement.

The group generally numbers around 18-20 members who bring various levels of musical experience to the mix, from singing in the shower to singing in church.  High school band instruments have found their way out of attics and closets and are now back in service when this group performs.  The singers have now expanded their song list to include tunes from the early ‘30’s and into the 21st Century. With the instrumental accompaniment and enthusiasm of musical director Dave Zahn, the “Hot Flashes” share their joy of making music with one another and with their audiences.

These “seasoned” ladies find themselves singing for a number of worthwhile causes and events, at various interesting venues in Wisconsin and Minnesota.  They have performed on behalf of area food pantries and for such non-profit organizations as the American Red Cross, AAUW, Lions; Clubs, and the United Way; they have sung in ornate (and not-so ornate) theatres, in parks, retreat centers, tents, barns and church sanctuaries.  They agree to performances as their busy personal calendars allow, but regularly schedule an annual benefit concert for St. Sophia’s ongoing missions, and a holiday-season performance in their “home” community of Stockholm.

The “Hot Flashes” are always on the look-out for new opportunities to expand their own musical horizons and new ways to entertain their audiences.  Costumes and choreography have found their way into some of the group’s selections, and future plans include working with a local film-maker to provide a visual accompaniment to several songs, and performing in a community theater melodrama as the “dance hall girls”.


Check out a few of our performances located elsewhere on our website, and keep an eye on the calendar for upcoming chances to hear the “Hot Flashes” live!  In Person!!  Near You!!!

Many of our pictures  on our website were provided by photographer Tilton Davis. He also photographed the last two photo shoots, the ones with the old fire engine taken at Ellsworth Fire Dept, and the most recent photos done at the Smiling Pelican Bakery and at the shores of Lake Pepin, in Maiden Rock, Wisconsin!